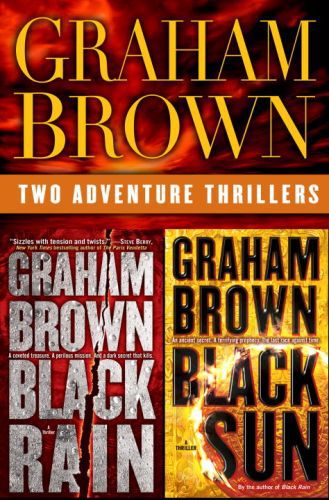 Graham Brown, co-author of the New York Times bestselling thriller Devil’s Gate with Clive Cussler, takes readers to the furthest edges of civilization with his signature blend of ancient legend and modern suspense. Gear up for the next installment of his Hawker/Laidlaw series, The Eden Prophecy, with this eBook bundle of the first two novels: Black Rain and Black Sun.
BLACK RAIN
Covert government operative Danielle Laidlaw leads an expedition into the deepest reaches of the Amazon in search of a legendary Mayan city, assisted by a mercenary named Hawker--unaware that their team is a replacement for a group that vanished weeks before. Shadowed by a ruthless billionaire, threatened by a violent indigenous tribe, and stalked by an unseen enemy that leaves battered corpses in its wake, the expedition desperately seeks the connection between the deadly reality of a Mayan legend and the chilling secret buried beneath the ruins.
BLACK SUN
In the heart of the Amazon, Danielle Laidlaw has made an incredible discovery: a translucent Mayan stone generating massive waves of energy while counting down toward the infamous apocalyptic date December 21, 2012. And somewhere, there are three more just like it. What power will be unleashed if all four stones come together? Who created them--and who has them now? Using a cryptic Mayan map and a prophecy that points to the end of the world, Danielle and her team race toward answers. But were these artifacts meant to save us--or to destroy us once and for all?
Contains a preview of Graham Brown’s next thrilling Hawker/Laidlaw novel, The Eden Prophecy!