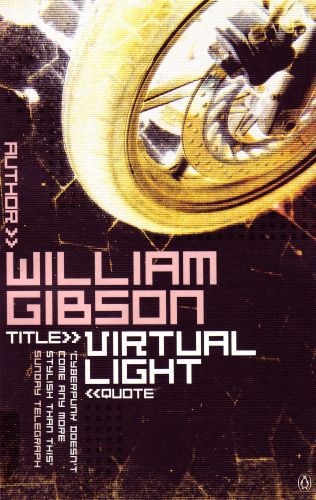 Chevette rides as a courier, banging her paper laminate-framed bike through the streets of a future 'Frisco - she lives for it. On an impulse, she's risked everything; stolen a pair of sunglasses from some jerk. No ordinary shades, either: loaded with super-sensitive data, they could decide the destiny of the entire city. Rydell is working for Mr Warbaby, who has been hired to recover the glasses. But Rydell is none too sure that he likes his new employment opportunity; with SFPD Homicide involved, an abandoned bridge populated by freaks and misfits, and some weirdness involving the Republic of Desire and a 'Death Star', it's turning out to be a very strange and dangerous scene indeed ...>
William Gibson, author of the classic Neuromancer and creator of cyberpunk, here turns his hyper-acute imagination on the near future - to supercharged, nerve-shredding effect.